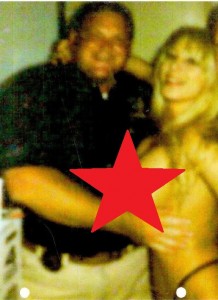 On July 27, 2012, I posted a story about Richard A. Scaman, the ethically challenged candidate for Falls County Sheriff who had his picture taken with a stripper in a topless bar while he was in uniform and on duty with the Texas Alcoholic Beverage Commission. You may recall that after TABC fired Scaman, he filed suit against my clients and the TABC director, alleging a conspiracy to make him look bad and to keep him from getting elected as sheriff. (It seems to me he has done a fine job of making himself look bad, without anyone else’s help).

Shortly after the July 27 post, I came across Travis Crabtree’s blog post about the new Texas anti-SLAPP statute.  SLAPP stands for “strategic lawsuit against public participation,” and the Anti-SLAPP statute protects people who get sued for exercising their First Amendment rights.  One of my clients openly criticized Scaman’s candidacy for sheriff, and Scaman tried to shut him up by filing a lawsuit. That’s exactly the kind of abusive litigation that the anti-SLAPP statute was intended to prevent. (And the tactic wasn’t very successful, because it inspired my client to launch www.fallscountysheriff.com, an anti-Scaman website).

The district court is scheduled to hear our motion to dismiss the lawsuit on anti-SLAPP grounds on August 23, 2012.  If we prevail, Mr. Scaman will have to pay my clients’ costs and attorney fees.

You might be wondering whether Mr. Scaman is represented by an attorney, and he is. Two of them, in fact. Bill Torey is the local attorney, but his role appears to be minimal.  Mr. Scaman’s lead attorney is Mark Stratton, a partner in the Austin office of Shannon, Gracey, Ratliff & Miller, LLP.

Shannon Gracey is a well-respected regional law firm, and that means they are not cheap. Mr. Scaman was fired from his job as a TABC agent, and the last I heard he was still unemployed. So how does an unemployed cop afford the $400-500 hourly rate of a partner in a major Austin law firm?

The Shannon Gracey firm name appears prominently in Mr. Scaman’s original petition, i.e., his lawsuit, but frankly I wonder whether the other partners at Shannon Gracey know anything about it. You can read the original petition by clicking here. In my admittedly biased opinion, the petition is far below the standards of a law firm like Shannon Gracey.  For example, there is no such thing as a claim for “tortious interference” with someone’s Constitutional rights, and any lawyer worth his salt would know that.

Moreover, there are no other attorney names from Shannon Gracey.  Typically, the name of a partner and an associate would appear in the signature line.  The associate (a junior attorney) typically would handle most of the leg work in order to save the client money, but it appears that Mr. Stratton is doing all the work himself.  Why? I suspect nobody else in the firm knows anything about this case, but time will tell. If you have any other ideas, post a comment or send me a message.

UPDATE: My client, Trent Pamplin, just reminded me of something:  Mark Stratton’s name is misspelled (as “Mark Straton”) at the bottom of his own lawsuit.  How did that happen?

The Texas Education Agency is now investigating sexual abuse allegations against Coach Steve Mulkey in response to a letter from the Union Grove Independent School District.  TEA investigator Scott Byrum is assigned to the case, and witnesses or alleged victims can contact him directly at 512-936-8237. 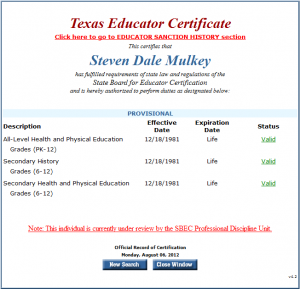