If Collin County District Attorney Greg Willis is stonewalling the criminal investigation of Attorney General Ken Paxton, this may explain why: Mr. Willis and Mr. Paxton are not just close friends, they’re business partners. And their partnership’s involvement in a shady real estate transaction may have cost Collin County taxpayers millions of dollars.

After my last blog post, where I questioned the personal relationship between the DA and the AG, a tipster led me to a May 4, 2014 Dallas Morning News article about the murky business relationships of then-Senator Paxton. That article is disturbing enough in its own right, but it turns out the Morning News vastly understated the problem, apparently because the newspaper was misled by the Paxton campaign.

According to the article, Mr. Willis and Mr. Paxton are among the 11 partners in Eldorado-Collin, L.P. Citing the Paxton campaign, the newspaper reported that the partnership bought 35 acres in Collin County in 2004 for about $700,000, then flipped a little less than half the property about eighteen months later for just over $1 million. The property was later used as the site of the Collin County Appraisal District building. … Read more

Texas Attorney General Ken Paxton may yet face criminal charges for peddling shady investments to his former clients, and his friends in high places may not be able to save him. On March 6, 2015, I sent a letter to Collin County grand jurors explaining that they can investigate and indict Paxton on their own initiative, regardless of whether District Attorney Greg Willis recuses his office from the case. Judging from the initial feedback that I have received, I believe the grand jury will give the matter fair consideration during its meeting tomorrow.

Willis’s campaign website still features pictures of him alongside Paxton, and although their longtime friendship does not legally disqualify Willis from the case, Willis’s silence is creating an appearance of impropriety.  The Travis County District Attorney’s Office publicly acknowledged its 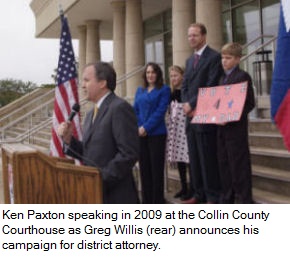 investigation of Paxton last year before deciding on January 29, 2015 that Travis County was the wrong venue, and most of the relevant facts are already matters of public record, thus there is no reason for Willis to be secretive about whether he is investigating Paxton. One might conclude that he is keeping quiet until the limitations period lapses.

Unlike the bogus charges against former Governor Rick Perry, the case against Paxton has legs. On May 2, 2014, Paxton signed an agreed order with Texas Securities Commissioner John Morgan admitting that he referred clients to his friend’s investment company even though he was not a registered securities representative (he also failed to disclose that he was getting a 30 percent kickback on investment management fees). As I wrote in my letter to the grand jury, I am surprised that his attorney let him sign that document because, in my legal opinion, Paxton’s signatures on the order and the attached affidavit are an admission that he committed a third-degree felony.  … Read more

Mark the date. On March 3, 2015, the citizens of Hearne reclaimed their government from City Attorney Bryan F. “Rusty” Russ, Jr. and the rest of the Booger County Mafia by recalling Councilwoman Maxine Vaughn.

Notwithstanding the race-baiting and fear mongering of the mafia and its allies, voters ousted Vaughn by a vote of 269 to 260. Residents petitioned for a recall election last August, and by law the election should have been held last November, but law doesn’t count for much where Rusty Russ is concerned.

Vaughn, Mayor Ruben Gomez, and Councilwoman Michael Werlinger refused to schedule the election, but on February 2, 2015, the Tenth Court of Appeals ordered the city to hold the election. Now that Rusty and his allies have lost control of the council, I have to wonder if they will start shredding documents at city hall tonight.