This is a long post, but there’s some really juicy stuff in here, so get yourself a cup of coffee and settle in. We have news about the latest inductees to the Booger County Mafia, including Robertson County DA Coty Siegert and Hearne Interim City Manager John Naron, plus enormous and unexplained legal bills, international intrigue, and a federal investigation that could hook a former Hearne city manager, a former councilwoman, and other members of the Mafia. 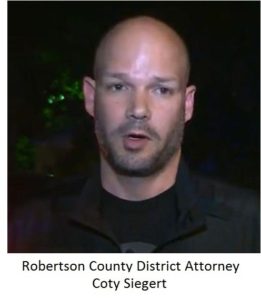 Two weeks ago I was contacted by the vice foreman of the Robertson County Grand Jury, and he confirmed what my friends have been telling me since January, namely that Coty is protecting Bryan F. “Rusty” Russ, Jr. and the other Mafia kingpins. In July, you may recall, I sent a letter to the grand jury because Coty was ignoring my request that he investigate Rusty for tampering with voter petitions.

While serving as city attorney for Hearne, Rusty had intercepted the petitions and held them in his office rather than allow the city secretary to turn them over to the county for certification.  The petitioners wanted to force a forensic audit of city finances, but Rusty wanted to block the election, apparently because he feared what the audit might reveal about him and his cronies (and now I’m wondering whether he was trying to hide the shady business deals that triggered the federal investigation).

In my letter to the grand jurors, I asked them to take matters into their own hands (as the law allows) and investigate Rusty, regardless of what Coty did or did not want.  According to the vice foreman, whom I’ll call “Mr. X”, Coty has been running interference ever since.  Mr. X said he told Coty after the August grand jury meeting that I needed to be brought before the grand jurors (as I had requested).  Coty replied that he could not subpoena me, although he would contact me by phone to see if I would appear.

What a load of bunk. Here’s an excerpt from a letter that I sent to Coty yesterday: … Read more