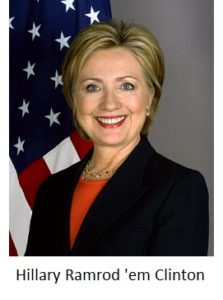 I changed my mind. After lamenting two weeks ago that bar complaints against Hillary Clinton’s lawyers probably would be swept under the rug, I decided to file the grievances anyway. I also filed grievances against Mrs. Clinton herself.

State and federal bar rules uniformly prohibit perjury and destruction of evidence, and there is compelling evidence that Mrs. Clinton is guilty of both. We’ve known for months that Mrs. Clinton’s cronies deleted emails from her secret, home-brew email server. More recently, the chairmen of the Judiciary Committee and Government Oversight Committee of the U.S. House of Representatives referred Mrs. Clinton to the Justice Department for prosecution of perjury based on false testimony that she gave during the Benghazi investigation.

Mrs. Clinton’s friends in the Obama Administration control the Justice Department, which means they can and will block any attempt to prosecute Mrs. Clinton for perjury (or anything else). The same goes for her lawyers. But maybe – just maybe – her tentacles don’t reach into every state and federal bar.

In Mrs. Clinton’s case, I filed grievances with the Arkansas State Bar, the U.S. District Court for the Eastern District of Arkansas, and the U.S. Court of Appeals for the Eighth Circuit. Mrs. Clinton is suspended from the Arkansas State Bar and the U.S. District Court for failure to comply with continuing legal education requirements, but she could reactivate her license at any time by taking the required credit hours. In the Eighth Circuit, however, she is still an active member of the bar, as is one of her attorneys, David “The Deleter” Kendall. I also filed grievances against Mr. Kendall and Mrs. Clinton’s other two lawyers, Cheryl Mills and Heather Samuelson, with the D.C. Bar and the Maryland Bar as well as the U.S. District Court for the District of Columbia. You can read the grievances by clicking the links above, and I’ve elaborated on the grievances below. … Read more