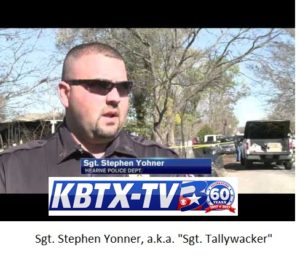 So how did he get hired? Did the chief not conduct a background investigation, or did he just ignore what he found? As you can see from my July 6, 2017 blog post, Sgt. Tallywacker had a shady history even before he was hired by Hearne.  … Read more

The U.S. Department of Justice will not release any records related to the murder of former Democratic National Committee staffer Seth Rich, according to a letter that I received today from the Executive Office for U.S. Attorneys. Actually, they have refused to release any records about Seth Rich at all, e.g., whether he had a security clearance or a background check.

The same office originally refused to even search for records related to Seth Rich, but it was overruled on October 2, 2017 after I appealed to DOJ’s Office of Information Policy.  Six months later, they’re still refusing to release anything.

I have already filed suit against the FBI and DOJ to force the agencies to release records (DOJ’s answer to the lawsuit is due next Thursday), and I am not particularly surprised by the response thus far.  For one thing, the Freedom of Information Act grants broad exemptions for records pertaining to law enforcement and prosecution.

Even so, those exemptions have limits, and not everything should be protected by FOIA. I expect to show, for example, that the FBI lied by claiming that it has no records related to Seth Rich.  My sources tell me that the FBI assisted D.C.’s Metropolitan Police Department in hacking some of Mr. Rich’s electronic devices, yet the FBI has refused to even search for records at its Washington Field Office, where the records would be kept. … Read more