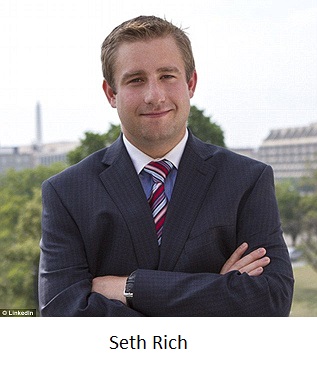 Does that mean that Mr. Rich’s murder is related to the leaked emails? I have no idea. But when, as Glenn Greenwald has asked, will it be appropriate to start questioning the official narrative?

Incidentally, our hero of the day, Sean O’Neill, is the same Sean O’Neill who ordered the FBI to produce records about the Hillary Clinton email investigation after the feds initially told me that her emails were not a matter of public interest. Not surprisingly, the U.S. Attorney’s Office gave me an equally ridiculous excuse for withholding the Seth Rich file, i.e., because I had not submitted a death certificate to prove that Mr. Rich was dead.

Bear in mind that I had requested records pertaining to the investigation of a murder.  If Mr. Rich’s murder was being investigated, would that not necessarily infer that he was dead? I thought the answer was obvious, and I’m glad to see that Mr. O’Neill agrees.

In the appeal that I filed over the weekend, I asked DOJ to order the FBI to search electronic records and hard copies in the Washington Field Office, where the records most likely would be kept. If records are found, I suspect the FBI will assert a law enforcement exemption, but at least the FBI will be forced to acknowledge that it is participating in the investigation.

On his own initiative, Judge Harris also ordered the clerk to unseal the records from Ty Clevenger v. Attorney Grievance Commission of Maryland. The entire docket is now available online.