As my regular readers know, I submitted evidence that Judge Smith grabbed and groped a female deputy clerk in his chambers, then Judge Hudspeth covered up the crime while he was serving as chief judge.  At this point, my appeal has less to do with Judge Smith or Judge Hudspeth than with the Fifth Circuit’s propensity to sweep judicial misconduct under the rug.  I’ve reprinted the entire letter below:

Members of the Committee:

I write to appeal the orders of the Judicial Council of the Fifth Circuit in the cases listed above, specifically the September 18, 2016 order concerning Judge Walter S. Smith, Jr. and the October 21, 2016 order concerning Judge Harry Lee Hudspeth. The two cases are related and, as you know, the Committee remanded Case No. 05-15-90120 to the Fifth Circuit once before.

The Fifth Circuit has an established reputation for downplaying and covering up the misconduct of its judges, see Skip Hollandsworth, “Perversion of Justice,” Texas Monthly, October 2009 (http://www.texasmonthly.com/articles/perversion-of-justice), and the latest orders appear to be part of that pattern. In both cases, it appears that the investigative process was delayed until the respondent judges could retire, at which point the Fifth Circuit could essentially shrug its shoulders and say, “Aw shucks, there’s nothing more that we can do.” For that reason, I wish to challenge the Fifth Circuit’s interpretation of Rule 20(b)(1)(B) of the Rules for Judicial-Conduct and Judicial-Disability Proceedings. Citing other circuits, the Fifth Circuit seems to suggest that further proceedings are unnecessary per se if a judge retires, further implying that a judicial council or special committee no longer has authority to investigate a retired judge.

In reality, nothing in the rules prevents a judicial council from investigating, censuring and/or reprimanding a judge following his or her retirement, and in fact censure or reprimand of a retired judge could still serve as “remedial action to ensure the effective and expeditious administration of the business of the courts…” See Rule 20(b)(1)(D). If judges knew that their misdeeds could ultimately be exposed regardless of how long they had previously escaped justice, that would serve as a rather strong deterrent against the sort of misconduct allegedly perpetrated by Judge Smith or Judge Hudspeth. Furthermore, and as explained below, nothing in the rules prevents a judicial council from making an impeachment referral after a judge has retired.

I would direct the Committee’s attention to Rule 20(b)(2). Under the heading “Mandatory actions,” the rule states that a “judicial council must refer a complaint to the Judicial Conference if the council determines that a circuit judge or district judge may have engaged in conduct that: (A) might constitute ground for impeachment; or (B) in the interest of justice, is not amenable to resolution by the judicial council.” Rule 20(b)(2)(emphasis added). As explained in my original complaints against Judge Smith and Judge Hudspeth, each is accused of misconduct that is punishable as a felony under federal law. Not only “might” that “constitute ground for impeachment,” 28 U.S. Code § 355(b)(2) strongly infers that felony crimes should be brought to the attention of the U.S. House of Representatives. And although the Fifth Circuit attaches great importance to its conclusion that Judge Smith had not sexually abused women in “many years,” I should note that there is no limitations period for judicial misconduct. Likewise, it is worth noting that Congress and many state legislatures have eliminated the limitations period for sexually abusive crimes. 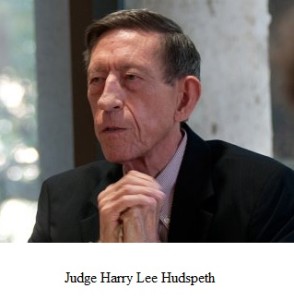 Furthermore, the initial investigation of Judge Smith was completed in October of 2015 and the initial order was released on December 4, 2015. Judge Hudspeth was allowed to retire quietly the following month, creating the appearance that the Fifth Circuit abated his case in order to give him a chance to retire and save face.

In both cases, the Fifth Circuit opined that impeachment referrals were unwarranted, but its bare bones findings do not allow the Committee (or the House of Representatives) to evaluate that conclusion. In footnotes to both orders, the Fifth Circuit wrote, “The Council further finds that the likelihood that [Judge Smith or Judge Hudspeth] will attain public office in the future is minimal, certainly not such as would warrant the significant additional expenditure and drain on judicial and Congressional resources that completing this proceeding and attempting impeachment would entail.” Those footnotes seemingly ignore the second footnote to the Committee’s July 8, 2016 Memorandum in Case No. 05-15-90120, namely the reference to the case of Judge Mark E. Fuller. In that case, the Committee recommended his impeachment even though he had already resigned and even though there was virtually no chance that he would “attain public office in the future.”

For example, the Committee directed the Fifth Circuit to make further findings about Judge Smith’s attempts to deceive investigators, but the Fifth Circuit shrugged that off with the following sentence: “The first order also indicated that there were misrepresentations by Judge Smith that extended the proceeding, but that did not affect its outcome.” That was the entire response to the Committee’s direction to make further findings, i.e., the Fifth Circuit simply refused to make further findings. In fact, the Fifth Circuit’s September 28, 2016 order is downright deceptive. Consider the following sentence: “As noted in the first Judicial Council order, there is evidence that there were other incidents involving Judge Smith similar to the incident that was the focus of the complaint.” In reality, the first order said absolutely nothing about other incidents, and that is why (1) I appealed the first order and (2) the Committee remanded the case.

Finally, I must address the Fifth Circuit’s conclusion in both cases that impeachment would not affect a judge’s retirement annuity. I am inclined to agree with that conclusion. Nonetheless, the Committee has not previously addressed the question (as far as I can determine), and even if the Committee agrees with the Fifth Circuit, the Committee may wish to flag the issue for Congressional consideration. One can make a strong case that a judge who committed crimes in office should not be drawing a six-figure retirement.

Thank you for in advance for your consideration.

One thought on “Judge Walter Smith and Judge Harry Lee Hudspeth, this ain’t over yet”