Last Thursday, I sent an email to Ms. Saltzman asking whether Judge Hudspeth’s retirement ended the judicial misconduct case and, if so, whether the investigative report would be released. “Ordinarily, retirement from judicial office results in the dismissal of pending complaints of misconduct or disability,” she wrote this afternoon. “However, because the related case 05-14-90120 is still being considered by the [Judicial Conference of the United States] committee, the complaint against Judge Hudspeth is currently being held in abeyance.”

Translation: Since I appealed the slap-on-the-wrist punishment of Judge Smith to the Judicial Conference, the Fifth Circuit is holding the case against Judge Hudspeth in limbo.  With respect to my second question — whether the investigative report will be released — Ms. Saltzman directed me to Rule 24 of the Rules for Judicial-Conduct and Judicial-Disability Proceedings.  According to subsection (a)(2), the investigative report should be made public, but the Fifth Circuit Judicial Council has the option of keeping Judge Hudspeth’s name private. 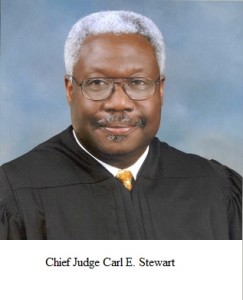 That would be pointless in this case, however, because I’ve already shared Judge Hudspeth’s name publicly. So I’m still wondering why the Fifth Circuit is holding the investigative report in limbo, because the outcome of my appeal should have no bearing on the case against Judge Hudspeth.

The more important issue in my letter to Chief Judge Stewart, however, is the six-month delay in investigating my second judicial misconduct complaint against Judge Smith.  As the Waco Herald-Tribune reported last week, the state bar filed charges against attorney Greg White of Waco concerning his representation of Judge Smith in the first misconduct case. Mr. White and Judge Smith concealed their attorney-client relationship from other parties who appeared before Judge Smith and opposite Mr. White.

In the six moths between the time that I filed the bar grievance and the time that the state bar filed charges, Chief Judge Stewart has held my related misconduct complaint in limbo, neither dismissing it nor appointing an investigative committee. Why the delay? The letter also explains that I have been “reliably informed” that the Fifth Circuit’s investigators were told not to explore other alleged incidents of sexual misconduct involving Judge Smith.

Back in February, I requested an FBI investigation after learning that Mr. White may have provided some legal services to Judge Smith at no charge, an illegal gift at best and a bribe at worst. Since Chief Judge Stewart never responded to my original request for a criminal referral, I asked Chief Justice John Roberts to make the criminal referral.

Last week, The Bryan-College Station Eagle reported that we amended our lawsuit against Grimes County Sheriff Don Sowell, Grimes County DA Tuck McLain, and other officials, alleging that Mr. McLain retaliated against my client and my co-counsel, John Quinn, after we filed the federal lawsuit.  The new allegations can be found in Paragraphs 31-33 of the amended federal complaint.

Retaliation is not just bad manners, it’s a crime, so I filed a bar grievance against Mr. McLain and asked the FBI and the Texas Rangers to investigate. In an April 29, 2016 affidavit, Mr. Quinn provided details of Mr. McLain’s retaliation, and I have since forwarded the affidavit to the bar, the FBI, and the Rangers.  I was planning to ask U.S. District Judge Alfred H. Bennett of Houston for a temporary restraining order against Mr. McLain, but first I’ll be conferring with Mr. McLain’s lawyers on Wednesday. Stay tuned.