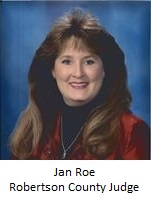 The political side of the equation is a lot more complicated. The neighborhoods targeted by Roe are overwhelmingly black, and absentee voting is as touchy an issue in Robertson County as it is anywhere else. After the confrontation in the courthouse, Judge Roe put an item on the commissioner’s court closed-session docket, and I am told that she was seeking to cut off funds for any legal defense of Siegert in the event that he was sued. Why? I suspect Roe wanted to organize a lawsuit against Siegert in her capacity as a political candidate, then use her role as county judge to limit his ability to defend himself. 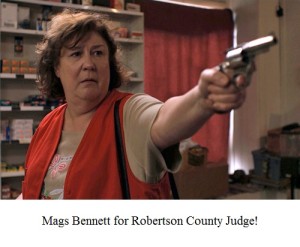 As I’ve explained on BoogerCountyMafia.com and elsewhere on this blog, Roe is a key player in the corrupt Democratic political machine that has ruled Robertson County since the 1800s. Roe is a tall and somewhat thuggish woman, and she reminds me slightly of the character Mags Bennett on Justified. I am informed that Bryan F. “Rusty” Russ, Jr., of all people, had to warn Roe that any retaliation against Siegert could result in a criminal charge of official oppression. After that, she apparently curtailed her attempts to get even.

Over the years, I have heard numerous reports of absentee ballots being mailed to vacant lots and vacant houses in Hearne, and even reports of voters arriving at the polls only to learn that someone submitted an absentee ballot on their behalf. Given the long history of endemic corruption in Robertson County, none of that surprised me.

Earlier in the year, the AG’s office sent vote fraud investigators to Robertson County at Siegert’s request, and Roe is already suffering politically because of her close connections to Rusty Russ, John Paschall, and the rest of the Booger County Mafia. I have to wonder if that’s what prompted the chairwoman of the Robertson County Democratic Party to make allegations that Roe’s opponent, Charles Ellison, had tried to buy the votes of two voters. According to the Bryan-College Station Eagle, the incident allegedly happened on September 25, 2014, yet the story was not printed until today, two days before the start of early voting.

Nelda Calhoun, the local Democratic chairwoman, is obviously trying to create a distraction. According to Siegert, Calhoun invited the Robertson County News to attend the meeting where she presented her complaint against Ellison. The newspaper sent a reporter, but ultimately did not run a story. KBTX reportedly refused to run her story as well. Finally, she convinced The Eagle to run her story.

Interestingly, the black community has not rallied to support Roe, even though her scheme was ostensibly designed to increase the number of black voters. The Robertson County Democratic Party has a long history of racism and political corruption, and there are signs that the alliance between the African-American community and the local party has begun to unravel. Stay tuned, because I’ll be blogging about that in the next few days.

CORRECTION 10/25/2014: The original version of this post reported that Siegert and Roe “got into a shouting match in the courthouse over Roe’s use of a convicted felon to sign up residents to vote by mail.” I am now told that the dispute in January concerned the definition of “disability,” whereas Roe’s use of the convicted felon was discussed later.