In a federal lawsuit filed yesterday, Kilgore College’s former maintenance director alleged that he was fired for reporting the school’s mishandling of asbestos on campus. 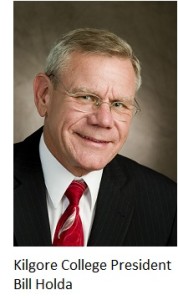 Dalton Smith publicly disclosed the illegal asbestos disposal — as well as secret audio recordings of his conversations with college administrators — in the Longview News-Journal on April 6, 2014.  Seventeen months later, the college terminated Mr. Smith and outsourced the entire maintenance department.

According to the lawsuit, prior to Mr. Smith’s termination he was stripped of his supervisory role on the main campus, placed on a satellate campus by himself, and told not to drive onto the main campus without first notifying the campus police.  The lawsuit further alleges that other employees were directed not to speak with him or assist him.

None of this should come as a surprise. As I reported back on July 27, 2015, the college’s attorney tried to bully a couple of my clients because they dared to ask inconvenient questions about the corruption and incompetence at Kilgore College, and I warned the college then that lawsuits were coming.

KC President Bill Holda thought he was headed toward a quiet retirement in the Northeast, but the next few years of his life likely will be consumed by litigation, particularly since he is named as an individual defendant in Mr. Smith’s lawsuit. And you can bet other lawsuits are on the way, particularly now that some of the school’s former employees are showing symptoms of asbestos exposure.

That should particularly concern the college’s board of trustees. The college is so poorly managed that it did not buy liability insurance for its board members — a fairly standard practice — which means the board members will have to pay out of their own pockets if they authorized or ratified either the illegal asbestos disposal or the retaliation campaign.  Now you know why former trustee Carlos “Scooter” Griffin resigned from the board, i.e., because his attorneys told him the financial risk was far too great.

Some of the current trustees who were particularly nasty toward Mr. Griffin, including current board chairman Larry Woodfin, may soon be swallowing their pride in a bankruptcy court. Worse, some of the school’s administrators may yet face criminal charges for knowingly exposing employees, students, and contractors to asbestos.

Thus far, Gregg County District Attorney Carl Dorrough has shown no interest in prosecuting any asbestos violations, and the leadership at KC seems to think it is free and clear.  But Mr. Dorrough may not have the final say.  Anyone who reads this blog knows that I have a history of bypassing recalcitrant or conflicted prosecutors by going directly to the grand jury.  Just ask Attorney General Ken Paxton.