If you want to understand just how nervous the Mafia is about losing control of city government, read Thursday’s front-page screed against Councilwoman Shirley Harris on the front page of the Robertson County “News” by publisher Dennis Phillips. Dennis never could distinguish between news writing and editorial, but he sure is working hard to earn that $30,000 payoff from the Mafia. 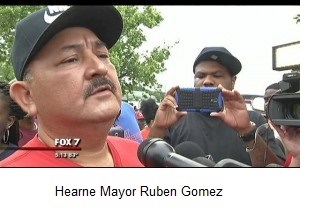 Meanwhile, Ms. Harris tells me she had a bizarre exchange at the local grocery store last night with another Mafia flunky, namely Hearne Economic Development Director Kent Brunette. According to Ms. Harris, Mr. Brunette “charged” her at the front door of Brookshire Brothers and made quite a scene, telling a store employee that he needed to help vote Ms. Harris off the council. I’m told that the employee, one of Ms. Harris’s former students, raised his voice and put the Mr. Brunette in his place.

I’ve written previously about Boy Wonder’s obsession with recalling Mr. Jackson from the city council, and I happened to notice an interesting April 25, 2017 post on the Facebook page “Hearne Election Truths.” The post has since been deleted, but it opined that Councilman Jackson still could be recalled – never mind the fact that the Robertson County Elections Administrator found that there were not enough valid signatures on the recall petition.

I’ve long suspected that the anonymous (and deceptively-named) Facebook page is run by Boy Wonder, and if so it would be further proof of his obsession, but we may find out for certain next week. I have subpoenaed Boy Wonder to testify at Mr. Jackson’s trial that begins on Thursday.

Former Hearne Police Officer Stephen Stem was hired by the Giddings Police Department in February, according to records from the Texas Commission on Law Enforcement. Stem made national news after shooting and killing a 93-year-old Pearlie Golden in 2014, the second of two shootings in less than two years.

Stem was later fired by the Hearne City Council, but he was no-billed by a Robertson County grand jury. He worked as a reserve deputy for Falls County Precinct 3 Constable Richard Aleman until he was hired by Giddings. Before joining Hearne PD, Stem had been suspended twice from his job with the Bryan Police Department.