Last week I filed a public information request with the City of Hearne after receiving a pseudonymous email alleging that the police chief had destroyed evidence (and no, I’ve never used the word “pseudonymous” before today). Here’s an excerpt from the email: 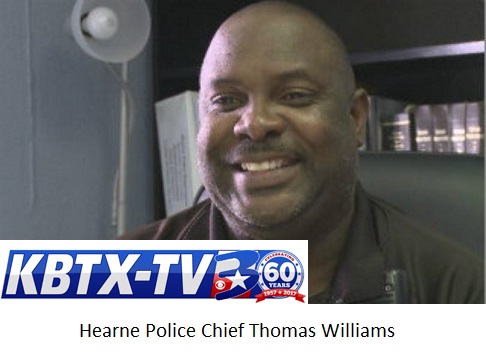 Chief Thomas Williams is under investigation at this moment with The Texas Rangers and Hearne PD is trying to remain silent about it. Thomas Williams is under investigation in reference [to] destroying evidence, drug evidence. The evidence was located inside the desk of Sgt. Stephen Yohner [a.k.a. “Sgt. Tallywacker“], who is not currently working with this department. After Yohner left the department they removed drugs that were legally used for investigations in catching drug dealers through informants. The department never logged the information or placed the evidence in the evidence room. After it was discovered while removing a desk out of Yohner’s old office, Chief Thomas Williams decided to flush all of it down the toilet, failing to log or place the drugs in evidence. The Texas Rangers were aware and started investigating Thomas’s action.

I don’t print that kind of allegation unless I have some kind of corroboration, hence my request to the city for “documents, records or communications (e.g., emails or text messages) regarding any illegal drugs that were found in the desk of former Sgt. Stephen Yohner,” including “information about the source of the drugs, whether they were kept in a secured location, any inventory of such drugs (whether maintained by Sgt. Yohner or anyone else), and the disposition of such drugs (e.g., whether they were flushed down a toilet).”

Well, sometimes people answer your questions by refusing to answer your questions.  In a letter dated August 18, 2017, City Attorney Floyd Akers admitted that responsive records exist, but he said the records are exempt from disclosure under Texas Government Code § 552.108 because their release “would interfere with the detection, investigation, or prosecution of a crime.”  In other words, Mr. Akers confirmed that there is some sort of investigation into whether drugs were found in Sgt. Tallywacker’s desk.

Before his departure from the city, current and former officers alleged that Sgt. Tallywacker had been mishandling drug evidence, e.g., picking up drugs from a crime scene but never accounting for them.  And city officials have already admitted that the Rangers were investigating the police department.  If the Rangers were investigating missing drugs, and the chief decided to flush some of the evidence down the toilet, then he could be charged with a third-degree felony under Texas Penal Code § 37.09.

The mystery email also alleged that a newly-hired police officer admitted to using marijuana “at least over 100 times” before he was hired, so I asked for any records that would reflect that. Mr. Akers said those records should be withheld because “the disclosure of [that information] would constitute a clearly unwarranted invasion of personal privacy.”

I’m not naming the officer, because I don’t know all of the surrounding circumstances. According to the officer’s LinkedIn page, “first and foremost” he is a “Christian man,” so maybe he gave up marijuana for religion. Or maybe it all happened back in high school. Besides, I became a libertarian on drug issues when I was a deputy sheriff back in the late 90s (mainly because it was the drunks who were beating their kids and threatening to kick my ___, while the potheads were just asking for potato chips).  Nonetheless, it speaks volumes about Hearne PD if they’re hiring officers who probably couldn’t get hired anywhere else.

Meanwhile, city and school district personnel tell me that Sgt. Christopher Witzel, one of the chief’s golden boys, has been double-dipping from the city and the school district, getting paid to provide security at the high school at the same time he is getting paid to supervise the day shift. It’s hard to imagine how he could do both at the same time. Then again, Chief Williams himself drives a school bus, ostensibly when he is supposed to be running the police department. One officer tells me that Witzel’s arrangement does not sit well with the rest of the department because other officers can only work off-duty jobs while they are (you guessed it) off duty. 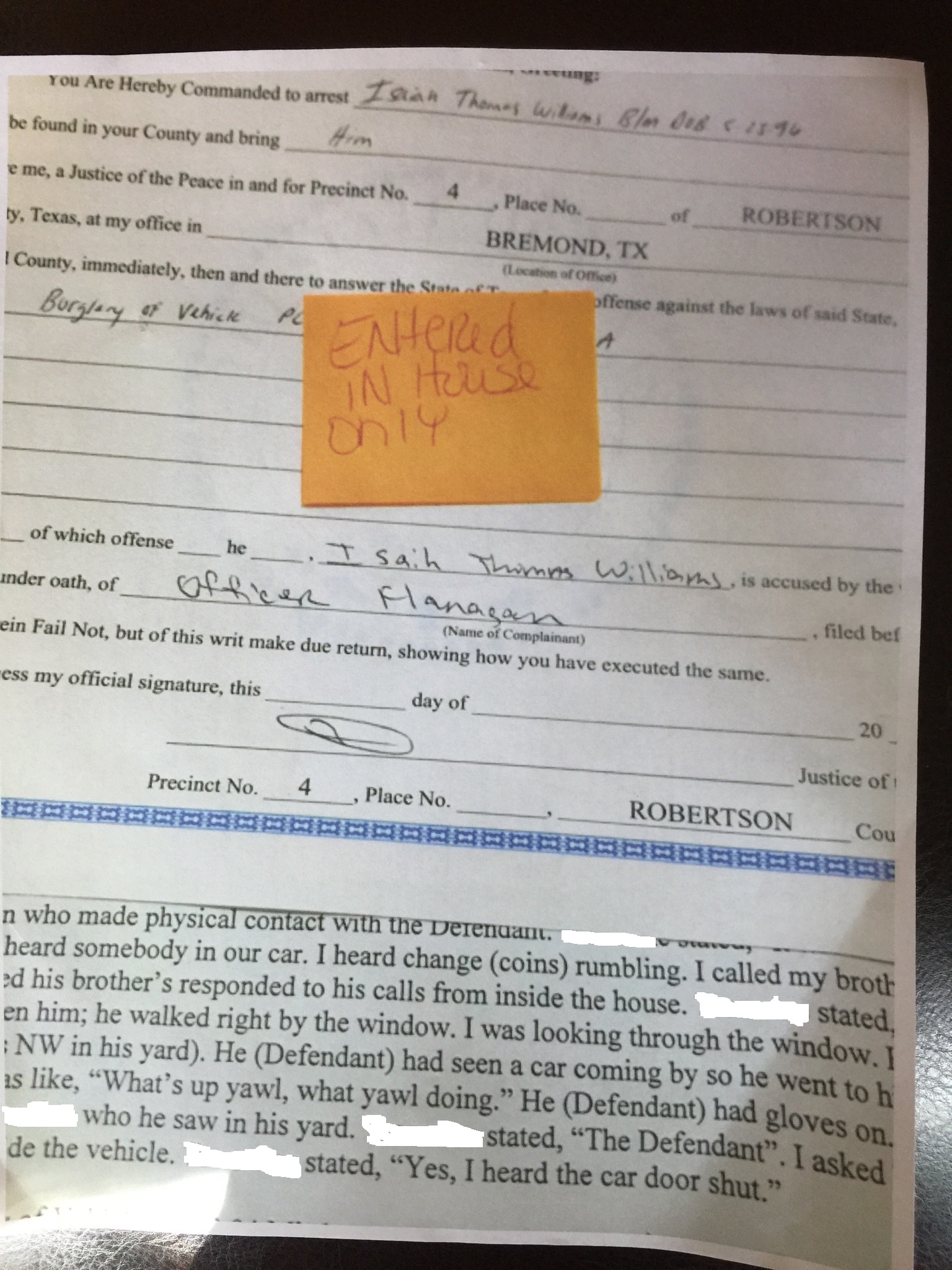 If you live in the Bryan-College Station area, you may recall that in May of this year the chief’s son was accused of burglarizing cars in Hearne. At the time, crime victims were upset that Hearne PD was investigating the case rather than the sheriff’s office or district attorney’s office. Now it looks like their suspicions were well founded. A city employee provided me with a photo of a warrant (at left) for the chief’s son, and an attached sticky note states that the warrant should be “entered in house only,” i.e., it should not be entered into the national or state crime databases. That means the chief’s son would not have been arrested if he was stopped during a traffic violation outside of Hearne (at least not for the outstanding warrant), because nobody outside of Hearne would have known about the warrant.

None of this should come as a surprise. Hearne is a hot mess, and its police department is no exception. I’ve written before about the unusually high number of police shootings in Hearne, and one of those shootings made national news in 2014.  It’s long past time to abolish the department and contract with the sheriff or one of the constables to provide law enforcement for the city.

The department does have some good officers, and the sheriff or constable would be able to retain the good ones and discard the rest.  Residents would get better police services, and it could save the city a ton of money (on insurance premiums, if nothing else). Unfortunately, that’s not likely, because even the smallest towns want to have their own little standing army.

One thought on “Did Hearne police chief destroy evidence?”