Thanks to the Drudge Report and The Washington Times, Hillary Clinton supporters lit up my Twitter feed like a Christmas Tree this evening.  I should probably feel guilty for snickering at them, but then I should probably give up

Clif Bars so I can lose a few pounds.  Yeah, not gonna happen.

As reported by the Times, the FBI denied my FOIA request for records related to the Clinton email investigation because it decided — and I’m not making this up — that the email scandal is not a matter of public interest. Actually, the FBI first told me that back on August 8, 2017, so I sent them a response on August 12, 2017:

As I wrote at the time, I seriously considered writing that letter in crayon. In retrospect, I should have. This morning I received a letter from the same FBI flunky informing me that the feds still did not consider it a matter of public interest. I wonder how much practice it takes to write something that dumb.

Meanwhile, Hillary’s hordes are calling me names and gloating because they think that I have been defeated and that evidence of Hillary’s guilt will never see the light of day. Obviously they don’t know me very well.

As Dave Lieber (a.k.a., “The Watchdog”) of the Dallas Morning News explained last year, in the last two years I’ve forced two federal judges off the bench and hijacked a grand jury to get Texas Attorney General Ken Paxton indicted. In other words, if I have to ramp up the pressure to make the FBI follow the law, then I won’t hesitate.  There are other scalps on the wall, most of whom are named on this blog, but you get the picture. 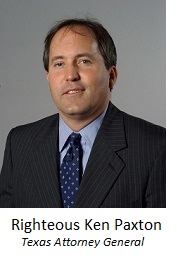 Or maybe you don’t.  Yes, I am a Republican, but so are Ken Paxton (the Peacock Baptist) and two of the three federal judges whom I’ve hammered on DirtyRottenJudges.com. In other words, I am an equal opportunity muckraker, not a blindly partisan Hillary hater. (In fact, Chelsea Clinton and I ate in the same lunch room while we were at Stanford, and I genuinely admired Chelsea’s graciousness and class).  My real problem is this: I cling to the antiquated notion that powerful people should play by the same rules as the rest of us.

Two years ago, I was getting hammered as a traitor and a pseudo-Republican by Mr. Paxton’s Kool-Aid drinking loyalists, who think we should all fall in line behind Righteous Ken because he tells us (loudly and often) that he loves Jesus. A particularly odious wannabe GOP kingmaker, Michael Quinn Sullivan, even wrote that he “saw no evidence in the public record” that I was a Christian. Of course, if Mr. Sullivan knew anything about Christianity himself, he would be familiar with what Jesus said in Matthew 6:1, namely, “[t]ake heed that ye do not your righteousness before men, to be seen of them: else ye have no reward with your Father who is in heaven.”

Here’s the bottom line: There are plenty of reprobates in both parties who seek and hold public office. Equally repulsive are the blind idiots who think that people on their side of the aisle can do no wrong. Idiots such as these are a BIG part of what’s wrong with America. If you’re one of them, you need to sit down and shut up.

Several people have asked me to create online petitions, so please sign both the White House petition and the Change.org petition if you are interested.  If you’re a New York or DC attorney who knows something about FOIA lawsuits (or is willing to learn), shoot me an email at tyclevenger at yahoo dot com. I would prefer to file in New York. If you win, you’re entitled to an award of attorney fees — right out of the government’s pocket. How tasty is that?

4 thoughts on “If you’re a blind partisan, then do us all a favor: sit down and shut up”