I was reminded of all that a couple of weeks ago when Texas Attorney General Ken Paxton unleashed his asp-tongued political consultant, Anthony Holm, against against Brian Wice and Kent Shaffer, the two special prosecutors assigned to investigate Mr. Paxton. Never mind the fact that Mr. Paxton admitted violating state securities laws that he voted for as a legislator, never mind the fact that he was sued for violating those laws and then violated them again,and never mind the fact that he voted to make his own actions a third-degree felony, Mr. Holm would have us believe that poor Mr. Paxton is just the victim of a vast, left-wing conspiracy. As a Republican, conservative Christian, and active member of the aforesaid “conspiracy,” I find that amusing.

Less amusing, however, are the evangelicals and social conservatives who blindly rally around Mr. Paxton, lashing out at those who dare to question the integrity of Righteous Ken. Back in March, I observed that if “evangelicals are willing to look the other way when Paxton commits a felony, that is really no different from the feminists who circled the wagons around Bill Clinton after he was accused of sexually harassing and/or sexually assaulting Juanita Broaddrick, Kathleen Willey, Paula Jones, et al.” Actually, it is considerably worse. Leftist ideology is generally relativist, so one could argue that the left’s hypocrisy is not really hypocrisy. Conservatives and Christians, on the other hand, have no such excuse. If God is no respecter of persons, evangelicals should ask themselves what makes Ken Paxton so special.

I first used the phrase “Peacock Baptist” a few years ago in reference to my old nemesis Bryan F. “Rusty” Russ, Jr., who was then a deacon in the First Baptist Church of Franklin, Texas, and who is still one of the most corrupt and immoral lawyers I have ever encountered. Rusty is

the kind of guy who could rob you blind on Monday through Friday, get drunk and curse like a sailor on Saturday, and still manage to be holier than thou on Sunday.

I’ve since observed similar traits in other lawyers, including Ken Paxton (and Gaines West), although the phenomenon is not restricted to lawyers or even Baptists. In Texas and the South, particularly in small towns, religion still retains some of the social significance that it has lost elsewhere, and that fact does not escape the notice of opportunists.  A shyster looking to convince people (including himself) of what a great guy he is will usually seek the biggest audience for his religiosity, and in most Texas communities that will be the First Baptist Church.

A Peacock Baptist like Mr. Paxton has strong notions of right and wrong and, like all of us, he still does things that he knows are wrong. But rather than repent and curtail his preferred areas of wrongdoing, the Peacock Baptist seeks to offset his guilt and shame with aggressive displays of righteousness. (Jerusalem didn’t have a First Baptist Church in A.D. 30, so in Matthew 23 Jesus referred to the religious show-boaters as scribes and pharisees.) If the Peacock Baptist does enough good things, he rationalizes, then all of the bad things that he does will not make him a bad person. So Ken Paxton can organize a religious charity on the one hand and swipe a $1,000 writing pen with the other.

The more I learn about Mr. Paxton, the more I am convinced that he genuinely believes, as did Bill Clinton, that he is being persecuted. After all, the narcissist is always blameless in his own eyes, and any criticism – no matter how justly deserved – is tantamount to persecution. This does not bode well for the Republican Party of Texas, nor for Texans generally, because it means we have some ugly months ahead of us.

I had already surmised that Mr. Paxton’s self-righteousness would not permit him to resign, but then his designated attack dog, Mr. Holms, confirmed that Mr. Paxton has no intention of resigning even if he is indicted. This is not unprecedented, as the late Attorney General Jim Mattox remained in office after he was indicted, and he was later re-elected after beating the criminal charge. But Mr. Paxton is not Mr. Mattox, and it will be much harder for him to beat a criminal charge since he has already admitted under oath that he broke the law.

Could anyone short-circuit the coming fiasco? Perhaps. Mr. Paxton’s election as attorney general is largely attributable to Senator Ted Cruz, whose endorsement plucked Mr. Paxton from obscurity and made him the GOP front-runner, so perhaps the senator will feel some obligation to clean up the mess that he helped create. If he asked Mr. Paxton to resign, Mr. Paxton might listen. Thus far, however, Senator Cruz is standing by the embattled AG. When he was told that special prosecutors planned to seek Mr. Paxton’s indictment, he replied, “Ken Paxton is a good man.” Even if that was true, good people sometimes do bad things, and Senator Cruz will eventually tarnish his own brand if he sticks with that line.

As things stand, Mr. Paxton’s fall from power will be public, prolonged, and ugly. Let’s hope that we learn something from the experience. One-party rule is always dangerous, and it has made the Texas GOP lazy and corrupt. In the coming months, expect to hear more about how our elected officials in Austin (particularly Rick Perry) were criticizing President Obama’s crony capitalism while engaging in their own. I still believe that our government in Austin is less corrupt than our government in D.C., but that really isn’t saying much, is it? 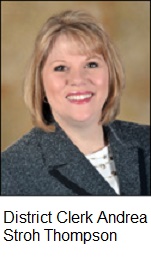 — Some Collin County Republicans are gathering signatures for a letter asking Governor Greg Abbott to appoint District Clerk Andrea Stroh Thompson to one of two new district judgeships in the county. I think her appointment would be a mistake. Last week I published a 2013 letter about her mismanagement of the clerk’s office, but my greater concern is her entrenchment in the tainted courthouse political establishment. That courthouse needs some new blood, and I hope the governor will like outside the courthouse to find his appointees.

— After one of the special prosecutors announced that they would seek a first-degree felony indictment of Ken Paxton, it occurred to me that Mr. Paxton will have a considerable incentive to rat out some of his business partners and political allies, e.g., Collin County District Attorney Greg Willis. It’s one thing to face a third-degree felony punishable by 2-10 years in prison, but quite another to face a first-degree felony punishable by 5-99 years. Normally, prosecutors cut deals with the little fish in order to get testimony against the big fish, but this case may operate in reverse, with Mr. Paxton offering up Mr. Willis and other allies in exchange for leniency.

One thought on “Ken Paxton: The rise and fall of a Peacock Baptist”