After I blogged about DPS’s retaliation against Billy on April 1, the Dallas Morning News picked up the story and it soon spread to publications as far away as Australia, India, and Africa.

Despite the nearly universal consensus that DPS commanders were making fools of themselves (and the rest of us who live in this state), the commanders dug in their heels and refused to admit that they made a mistake. As expected, I have since received tips about other troopers who were photographed with celebrities with criminal backgrounds, yet those troopers were not disciplined. 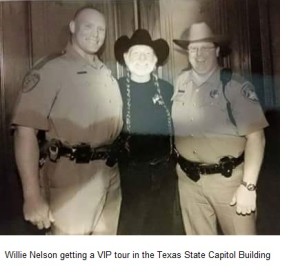 Consider the photograph on the left, where Willie Nelson stands between two troopers.  My sources tell me that the photograph was taken by a state-employed photographer after the troopers were directed by their DPS superiors to take Willie on a tour of the capitol building.  Apparently it’s OK to be photographed with a long-haired white musician who smokes weed, but not a long-haired black musician who smokes weed (and I can’t wait to hear how DPS is going to try to explain that to an Austin jury).

On the other hand, nobody at DPS cared when Billy had his picture made with CeeLo Green, another black musician with a criminal history, but then that picture was taken before Billy pooped in the punch bowl, i.e., by filing a criminal complaint against another cop.

Meanwhile, I have been contacted by other current and former DPS and TABC officers about corruption in their respective departments, and some of those tips have been very intriguing.  For example, I am investigating whether TABC Executive Director Sherry Cook legitimately earned her peace officer license, or whether it was awarded via a special VIP program run by her husband Maurice, the former Texas Rangers chief who was forced out by DPS after allegedly giving false testimony about a murder investigation.  I am also investigating a report that TABC routinely destroys records that would demonstrate mismanagement at the highest levels of the agency. More on all of that later.

In my April 1 letter to Col. McCraw, I asked for information about DPS’s use of facial recognition software. You may recall that one of Billy’s supervisors told him that DPS discovered the Snoop Dogg photo because the agency monitors social media. On March 30, I had asked whether DPS used its facial recognition software to monitor DPS employees on social media, and I was told that I could expect an answer the following day. That was nearly a month ago, and DPS has ignored my subsequent requests for an answer to that question.

If you are wondering what is so special about May 1, I can think of two things. First, it falls on a Friday, and politicians and bureaucrats always release embarrassing information on Friday afternoons (because the weekly news cycle is winding down and fewer people are following the news).  Second, the Texas Senate has proposed tripling DPS’s budget, and House and Senate negotiators are meeting this week to finalize that budget. I doubt that DPS wants a debate about Big Brother and facial recognition software when so much money is on the table.

WHAT NEXT FOR ATTORNEY GENERAL KEN PAXTON?

A couple of readers asked why I haven’t had any recent updates about the criminal investigation of Texas Attorney General Ken Paxton.** Short answer: I have to earn a living every now and then, and that’s hard to do while researching and writing for a project that pays me nothing. Nonetheless, I’m still actively investigating Mr. Paxton, although lately I’ve given most of my findings to reporters at other publications.

As you probably know by now, Collin County DA Greg Willis finally recused himself from the case against Mr. Paxton, his friend and business partner. In his letter to District Judge Scott Becker, however, Mr. Willis only recused himself from any case concerning Mr. Paxton’s violations of the Texas Securities Act. That distinction is critical. As I explained in my March 23 post, Mr. Paxton and Mr. Willis both were involved in a couple of shady transactions for the purchase and sale of the property that became the site of the Collin Central Appraisal District (“CCAD”) headquarters.

In a March 21 letter, I asked Mr. Willis to recuse himself from any investigation of those real estate transactions. Thus far, Mr. Willis has not recused himself, and I know what his excuse will be: he is waiting for another law enforcement agency to bring the case to him, and then he will recuse himself. After all, that’s the same shuck and jive he used when he was stonewalling the securities investigation of Mr. Paxton.

I’m still gathering records about the CCAD transaction, and I plan to file a formal complaint with the Texas Rangers and the McKinney Police Department as soon as I’m finished.  Stay tuned.

* SXSW sent a $575.00 check to Billy to help with his legal expenses. Very cool, and much appreciated. If you want to help Billy wage war against Goliath, you can contribute via Fundrazr.com or mail a check payable to Billy Spears at 252 CR 3870, Mineola, Texas 75773 (none of the money will go to me, but it will be used for depositions, etc. and to pay other attorneys).

** At the suggestion of one of those readers, I added a feature on the top right-hand side of this page that allows anyone to receive an automatic email notice when new information is posted on LawFlog.