As I told the Waco Tribune-Herald on Friday, the Fifth Circuit judges couldn’t very well ignore the first incident, because I gave them a transcript of the victim’s testimony, but they sure ignored the other alleged incidents. Fortunately, the Committee on Judicial Conduct and Disability of the Judicial Conference of the United States (wow, that’s a mouthful) ordered the Fifth Circuit to conduct a more thorough investigation.  The committee also ordered the Fifth Circuit to elaborate on its finding that Judge Smith had been deceptive during the investigation.

Smith’s case is looking more and more like that of former U.S. District Judge Samuel Kent of Galveston, a tyrannical alcoholic who, like Smith, served in an outlying courthouse where he was the only federal judge in town.  Kent received a four-month suspension for generic sexual harassment, and that probably would have been the end of the story but for the persistence of his victims, who told the Houston Chronicle that the “sexual harassment” included Kent tearing the clothes off of one of his victims, putting his mouth on her breast, and attempting to rape her.  The public outcry finally forced the Fifth Circuit to do the right thing and recommend impeachment.

Yeah, the Fifth Circuit has a very poor record on matters of judicial integrity.  That’s why I sent a letter to Fifth Circuit Chief Judge Carl E. Stewart this morning asking him to refer another pending complaint against Judge Smith (about his secret attorney-client relationship with Greg White) to a different judicial circuit.  Then again, the Fifth Circuit may not be the worst.  I’ve previously reported how the judges of the D.C. Circuit, including President Obama’s Supreme Court nominee, Chief Judge Merrick Garland, have circled the wagons to cover up U.S. District Judge Ellen S. Huvelle’s role in a $7 million fraud. The D.C. Circuit refused to investigate Huvelle, and now her colleagues on the district court are trying to disbar me.  It’s a drama worthy of the Clintons (and, as it happens, Hillary’s personal lawyer signed the charges to disbar me).

COVERING UP THE COVER UP

In this morning’s letter to Chief Judge Stewart, I requested the release of the Fifth Circuit investigative report on Judge Harry Lee Hudspeth. According to Judge Smith’s victim, she reported the assault through the chain of command, but Judge Hudspeth (who was serving as chief judge at the time) covered up Judge Smith’s misconduct.  The investigation of Hudspeth was finished last year, but he was allowed to retire quietly in January, most likely to avoid the embarrassment of judicial discipline.  Since then, the investigative report has been held in limbo. One cover-up begets another, it seems.

Shelley Saltzman, an assistant to Chief Judge Stewart, wrote in a May 2, 2016 email that judicial misconduct cases are normally dismissed when a judge resigns or retires.  In today’s letter to Stewart, however, I directed him to the case of former U.S. District Judge Mark Fuller of Alabama.  Fuller resigned while he was under investigation, but the Committee on Judicial Conduct recommended his impeachment anyway.  If Hudspeth covered up a felony to protect another judge, then he should suffer the same indignity as Fuller. Congress should take away Hudspeth’s retirement and make him live on Social Security.

WHERE ARE THE FEMINISTS AND THE DEMOCRATS?

I’ve been trying to get Judge Smith impeached for almost two years now, and frankly it’s been a lonely battle.  As I wrote about in my recent guest column, Congressman Bill Flores (a.k.a. “Spineless Bill”) talked tough about impeachment during his primary campaign, then 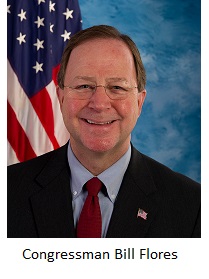 dropped the issue as soon as he won re-election.  I guess that shouldn’t surprise me.  Even though the Constitution makes the House of Representatives responsible for impeachment, Congress has long tried to punt that duty back to the judiciary.  And the judiciary, meanwhile, circles the wagons and protects its own.

I reached out to women’s organizations, assuming that they would jump all over a federal judge who preyed on women, but I assumed wrong. Nobody lifted a finger. I also reached out to Democrats, assuming they would jump all over a corrupt Republican judge. Again, nobody lifted a finger. So a federal judge sexually abused women in the courthouse, and his colleagues tried to cover up most of what he did, but the only person making noise about it is me, a white, pro-life Republican male from rural East Texas. I don’t get it. I really don’t.

In a fascinating September 18, 2015 article about Judge Fuller’s case, the New York Times noted that Senate Judiciary Chairman Charles Grassley re-introduced legislation to create an independent inspector general for the federal judiciary.  It’s a desperately-needed reform, but Senator Grassley has not yet moved his own bill out of his own committee.  So do something about that. Send an email or letter to both of your U.S. senators, and tell them to co-sponsor Senate Bill 1418, the Judicial Transparency and Ethics Enhancement Act of 2015. Seriously, do it. It’s important.

IF YOU KNOW SOMETHING, SAY SOMETHING

As I wrote about on May 27, 2016, the U.S. Marshal’s Service assigned a protective detail to U.S. District Judge Robert Pitman, the judge assigned to hear Judge Smith’s cases while he is suspended, allegedly because of an email that Judge Smith sent to Judge Pitman.  I’m still trying to get my hands on that email.  The Marshal’s Service assures me that it is gathering records in response to my Freedom of Information Act request, but I don’t know whether that will include the email.  As always, I welcome tips and document dumps, and I protect my sources.

One thought on “Sexual misconduct in the federal judiciary: where are the Democrats and feminists when I need them?”